Christine Breden Committee member coordinator and Trustee attended a dally rally was held on Sunday 26th February at Gorlestone beach near Gt Yarmouth. About twenty dogs were there for the morning. After a walk along the beach we then posed for pictures and went to the Doggy diner café where everyone can take their dogs into and have drinks and snacks etc. the dogs are given doggy biscuits free of charge – a good time was had by all the dogs were of course very good.The first picture shows Lottie at the very back of the photo in the middle with the blue harness on who was moved up here abouttwo-months-ago by Christine when she was re-homing coordinator. She is settling in well and the training they are doing with her is working well. She came from Qatar and was brought over here by the person who rescued her and then was re-homed which did not work out, so her rescuers mother had her for a while and then they asked British Dalmatian Welfare to rehome her. 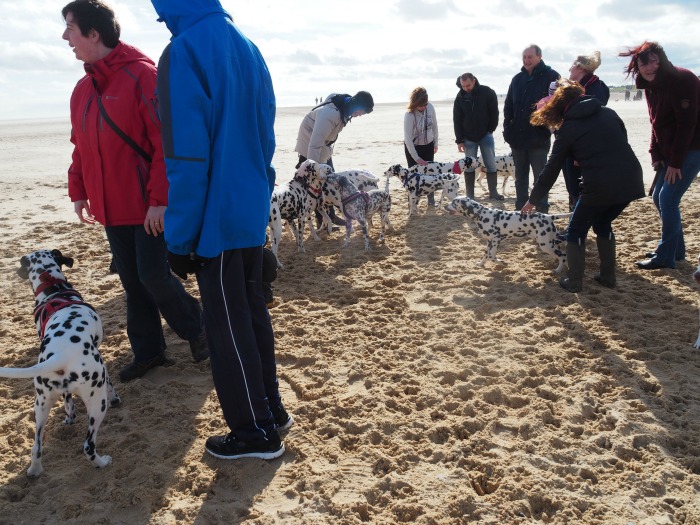 The second picture shows on the left the chap in the red coat with Roly (liver) who was rehomed by Darren Cliff and Simon Hipkiss when they were doing their summer stint as re-homing coordinators about a year ago. Roly with the man in red coat

Another of Lottie (now Lucy) with her blue harness on and of course the ‘group’ photo. The weather was kind to us lots of sun and not very windy! And we caused quite a stir on the beach with many other dog owners there with their dogs overwhelmed by seeing so many Dalmatians all together just enjoying themselves chasing around and behavingthemselves.