Many people have strongly held opinions about the character of each sex within the breed. As with breed traits some males or females may exhibit all, some or none of the typical characteristics listed here. 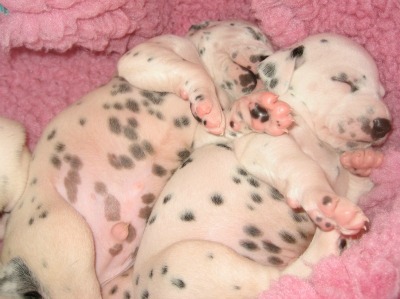 Firstly, Dalmatian Dogs tend to be larger, heavier and  stronger than females. Males can be wilful and more difficult to train some males will wonder off and wont come back when called. Females are generally smaller, lighter and less strong than males, though don’t be fooled an adult female Dalmatian can be very strong. Bitches are said to be more biddable and less dominant and may be easier to train.

Male Dalmatians may benefit from being neutered this often removes some or all of the male dominance from your dog he may still exhibit some behaviours such as humping. Female Dalmatians will have their twice yearly cycle and loose spots of blood for part of that period, we recommend that you have your bitch spayed after she is sexually mature (15 to 18 months of age) and is between cycles. This will remove the twice yearly mess in your house and may calm her temperament. If the Welfare Dog we re-home with you is entire, British Dalmatian Welfare will contribute towards the cost of getting your dog neutered or your bitch spayed.

Anecdotally from talking to many Dalmatianists  it would appear that males are often described as, very affectionate and that they, enjoy time with their owners they are, loyal, protective and described as, big softies! We have often heard it said that the love you get from a male Dalmatian is, like no other. However, males it would appear often seem to lack in the brains department when compared to females (apparently also a widespread trait in humans too!)

Females are said to be, quick, clever, bright and more independent than males. They are reported to be more self reliant and enjoying affection, but on their terms, when they decide they want it. Dalmatian females are always pretty!

Most of us have owned Dalmatians that fit both, some or all of the above and have owned males and females that are a mixture of all these traits.

Things to consider are:

Adult strength who of the adults will walk the dog?

Training needs will you involve your children in training?

Cost of neutering and Spaying

Your experience of the breed as adopters