A friend who owns Afghan hounds invited me to join them for a day’s racing. They have a league for Afghans only, but allow other breeds to race with them as well, so I took my Dalmatians, Skittle and Nugget.

Afghan racing takes place on a normal greyhound track and usually starts at midday. There are four dogs in each race, they run over a distance of 260 or 460 metres, chasing an electric hare just as Greyhounds do.

Starting blocks can be used. When Nugget tried a starting block he managed to turn round to face the wrong way! I decided to hold his collar instead – I was worried he would put a leg through the front gate and it would get caught when the gate lifted to start the race.

Skittle went flat out for about 100 metres but couldn’t see the sense in it and came back to me. Oh well, you can’t be good at everything, and Skittle really enjoys carriage dog trials. That left Nugget to fly the flag for the Dallies.

In his first race, Nugget ran in the 260 metres in a time of 23.91 seconds, beating the Afghans! After this result the Afghan owners started to call him the ‘Amazing Dalmatian’. 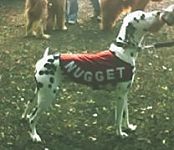 Nugget certainly enjoys all the action – here he is in his racing coat. He loves racing so much that he goes ballistic as soon as he hears the electric hare start up, even when it’s not his turn to race. After a race I’m sure he would eat the electric hare if I didn’t catch him.

We haven’t done any special training, Nugget is very fit from our normal exercise. Although he’d love to do more, we haven’t done more than 3 races a day.

The Afghans seem to accept their unusual spotted competitor as just another one of the pack. Nugget seems to be more interested in catching that hare!