Many of you are kind enough to buy things from our shop or fund raise for us. Some are also kind enough to volunteer to help us with Rehoming. Harry’s story is an example of why we all do what we do.
Harry is two. We were contacted by a carer of his owner a few months ago. She explained that the owner was unable to care for Harry any longer and would welfare be able to find him a new home? Following a chat with Harry’s owner our experienced volunteer Paul Hoskins took a look at him. Paul found him to be a delight and a lovely dog whose life was in chaos.
It took us a few weeks to find the right home and we finally managed to move him early in August. Paul Hoskins picked him up and planned to meet our next volunteer who would continue the journey to his new home in the southwest of England. After a short time Paul noticed that Harry was trying to pass urine but was unable to do so. Maggi our next volunteer and committee member arrived to do the next leg of the journey and both Paul and Maggi feared that Harry had bladder stones a condition that most Dalmatians are prone to.
Situated at a service station on M1 Paul decided to take Harry to his local vet. Shortly after arriving the vet had passed a catheter and found a bladder full of stones! These stones were trapped in Harry’s urethra and were preventing him from passing urine. An operation and a thousand pounds worth of welfare funds sorted the boy out. As he was too ill to travel Paul and wife Karen kindly decided they would look after him until he was well enough to travel. His adopters were kept up-to-date and were still very interested in adopting Harry. We talked to them about bladder stones in Dalmatians and sent literature about foods to avoid and methods to use to reduce the risk of stones re-occurring. Certain types of protein that cause urate bladder stones to form are to be avoided all together. Harry will be on a diet low in purines for the rest of his life.
Harry made a good recovery over the next day or so but then he was unable to pee again 48 hours later, so Paul took him back to the vets who again noted he had more stones many of which would have been in his ureters and kidneys. Once again the vets patched him up several hundreds of pounds of welfare money spent to help this boy. Amazingly Paul and Karen were prepared to have him again until he was able to travel despite their mature female Dalmatians telling off a frisky youngster!
Following further checks and more TLC from our volunteers Harry finally moved to his forever-home three weeks later and is now settled in and is a changed dog!
British Dalmatians Welfare only works because of the support and hard work of our fantastic volunteers. All of whom are “Dalmatianists” and are experienced in the care of our breed. We must also thank Pauls’ vet who gave Welfare a significant discount on Harry’s bills. As the breed rescue service we have resources both financial and human to help Dalmatians in need. Re-homing is not always straightforward and as well as physical health problems our Dalmatians often need behaviourist input in order to unpick poor socialisation or lack of training. We are always there to help and support. 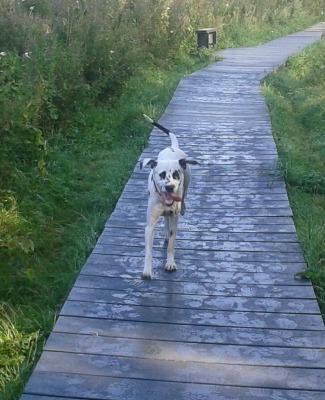 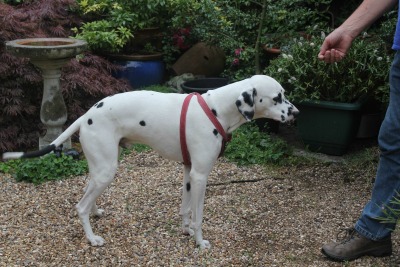